Hello everyone, this forum has been great and I have been watching, reading and even commenting here and there. Well now its my turn to put my boat on the block. Yesterday I started, and completed, Phase 1 of my conversion. I will have to say, before I go any further, a thank you to asinz who not only gave form to what I had in my head and was looking for, but who also took time to talk to me about his build some. He did tell me he sold his, but maybe he will get another one before long.

On to the boat...it is a 12' Aluminum Landau 1256f model. I picked this boat up for $200 off a co-worker, no trailer or motor at first, just the boat. I did end up going back and buying a 9.8hp Nissan that was barely ever used, but more on that later. The inside bottom measures 36" so after reading around the site I was concerned about putting on a deck like my cousin and I felt it needed. Here is what we started with. 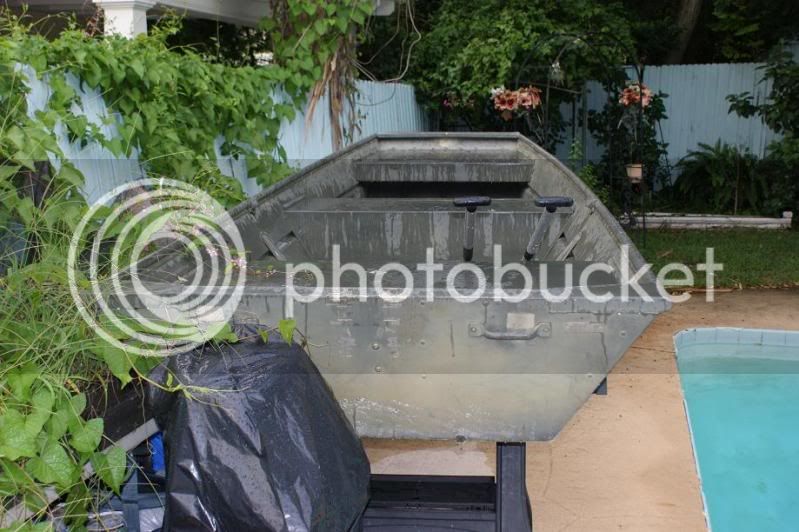 Went over to Gander Mountain and picked up a couple boat seats on sale, the colors are what will be on the boat in the end, but for now it is just the seats.

The first thing I did, while awaiting my cousin/co-fish-slayer, to arrive, was cut a simple deck board to mount the rear seat on. We are using fixed bases with swivle plates, I considered going with the pull off ones but I don't have anywhere to store them so they are going to have to stay on the boat anyway, and this will make a thief have to work a little harder to get them if they want them.

Now the front seat had to come out, for the mod that I found in asinz's boat. We marked and cut the seat out, removed the foam and left about an inch of metal all the way around to have something to bolt the side boards to. We are considering putting two motorcycle batteries up in them for lighting, but that is still up for discussion. I hate to waste space. In the pictures you will see red lines where we removed metal, and yellow where we left to fold. The front and rear plywood supports were made that way to keep structural integrity to the boat.

Now that this was done, we put foam under the decking we installed in the next couple pics, sorry not to get pics of that but it slipped my mind while we were working.

It will hit the lake just as you see it tomorrow for a test run, to see how it feels on the water stability wise and then we will make any needed adjustments.

So this was phase one. It took about 6 hours to complete from start to finish and the next phase will be the middle raised floor, simply built on the ribs, and a possible live well in the front to replace the small metal shelf that came stock. There is of course coating the wood, I think I am going to use Durabak on the floors and decking, Steelflex on the bottom and some paint to make it look sharp.

It looks great. I like how you cut out the front seat but left enough for support and possibly some storage in the small cut outs. Keep up the great job..
2000 Bass Tracker Pro Team 165
40hp Mercury outboard
55lb thrust Motorguide trolling motor
2000 Trailstar Trailer
Top

Creative thinking on the seat cut out

Did you see that some where?
Top

Looks great, we want to see you test it in the pool
Top

I like the front deck cut out. What are you plans for the open areas?

I may do something like that with my boat.
How did you attach the decking in the front or is it just resting on the hull?

Only other comment is that the sternseat looks a little high to stear from under power. May want to be careful when you test drive it!
Carl
Fishin' & Duck Huntin' Coastal AL!
My Rig: 1440MV with an 18 Nissan 2 Stroke
Outdoor Alabama on the Web:
https://www.outdooralabama.com/
Top

DenisD wrote:Looks great, we want to see you test it in the pool

LOL...we would if we could get it back inside the fence with the seats mounted, when you come in my gate it is a sharp turn and the boat has to be up on its side...that was the plan. It is hitting the lake at 7am tomorrow though. Nothing like testing under fire huh!

I may do something like that with my boat.
How did you attach the decking in the front or is it just resting on the hull?

Only other comment is that the sternseat looks a little high to stear from under power. May want to be careful when you test drive it!

The front seat mod idea came from a user here asinz who did this to his. It was what I had in my head and when I saw his it was like "YES! Finally" LOL. I knew we had to keep structural integrity so we had to make a support to run side to side and still allow us to put in the walk through style deck.

We are also a little concerned about the back seat, it may need to be lowered and if so I will fab a small hardwood box to place it on. When I sit on the stock bench my arm is cranked up high to run the throttle and navigate, it makes my shoulder very sore by the end of the day, so I don't think it will be too high for that, but my concern is it may be too high for my legs to sit comfortably.

Oh, and the decking is screwed to the support beam that runs side to side as it is raised and I could safely put a screw there, you can lift the boat by grabbing the front of that deck and lifting. We hope that will add to some stability as it takes a pounding sometimes running across the lake.

It looks great, seems very functional and when we hit the lake in the morning we will see. Lake Conway...here we come!

fishinchef wrote:I like the front deck cut out. What are you plans for the open areas?

Those two areas are being considered for two 12v motorcycle batteries (one on each side) to run any lighting up front and maybe a live well pump if we put one in. The only lights we would consider are LEDs so they take such a small draw we could go all night on two of those batteries and still have a deep cycle for the trolling motor if we want it.

Thats why they are still open, just considering options.

Well the test on Lake Conway went pretty good! The boat was VERY stable while standing on that front deck fishing, both my cousin Steve and I were able to do that. The back seat, which looks a little high in the pic, is quite comfortable to sit in, fish from and drive from too. We are awful excited at the next step....A TRAILER! LOL...yeah we been lifting it in and out of a truck bed...and after 8 hours in direct FL sunshine, neither of us wanted to lift a foot into the truck....but the boat had to come home too.

Here are a couple pics. I don't have any from shore because, well, we were both in the boat.

If a Dragonfly lands on you it is considered good luck. I actually cast under them on the lake and have great luck with bass, but probably because they are being tracked from below by the bass. Anyway....what is it considered if two sets of them are on you having sex? I considered it a photo op....while my cousin was kind enough to hold still for the pic.

My first was pretty quick to come to the boat

Steve got one shortly after

Then the little ones got in on the action

So all went well. Phase 2 will begin shortly as I have already ordered my Durabak coating, and it is on the way. Anyone else use this stuff yet?

Nice catchin', and congrats on the maiden voyage!

ober51 wrote:Lookin' good, I wish I could catch ANYTHING this year.

It ain't been easy this year for us either, the heat is making everything sluggish, but we are fishing the drop-offs, me with little white tailed spinners and him with purple worms, and they are hittin' it. Somtimes they hit so light your not entirely sure you have one.

The canals have also shown consistant fishing, getting the ones laid up under the bridges in the shade is actually pretty easy.
My 12' Flat Bottom Jon Boat Mod
Top