Got This in my email today

One of the older technicians at work was telling me a story today about a pistol that was in his in-laws family.

He tells me that his wife's late father, who was a marine in the battle of Iwo Jima, had brought back his pistol from the war. I'm thinking, ok must be a nice old 1911 model, one that has probably seen more than a few soldiers hands. then comes the rest of the story.

Turns out that the guy's father in law, had a camera with him in his sack, and had taken some pictures of when they raised the flag on Mt. Suribachi. He submitted his photo, but it was not chosen as the one that is now famous. The family still has this picture hanging in their living room.

A few days after the flag raising, the Japanese attacked the marines, and another fight broke out. As they are in the middle of everything, a Japanese sniper takes a shot at him. The bullet hits him in the right wrist, and hits his gun hanging from his belt. The round, after completely disabling his right hand, penetrates his leather pistol holster, and embeds itself into the slide of his 1911. fragments from the round penetrate through the other side of the holster, and into his leg, injuring him further. The marine was able to get to the medic, where he was then evacuated to care for his injuries.

So the technician asks me if I would like to see it. After telling him the obvious, he calls his wife's brother and asks if he could bring it up to the shop.

Here are the pictures I took after listening to the same story again from the Marine's son. (it was a good story, I had no problem listening twice.)

I asked him if he would mind me posting them on here, as long as I blocked out the serial number. He said go right ahead.

The Marine's name was Horace Arthur Smith "Arty". he passed away 3 years ago. 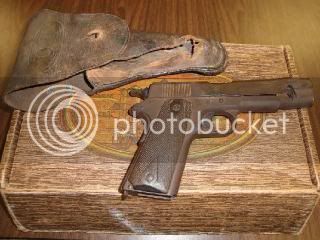 2TIM 4:7 I Have Fought the Good Fight, I Have Finished the Race, I Have Kept the Faith.

one of the mods should move this up to Watering Hole - it would get more views and doesn't really belong in the funny joke section IMO.... great story

FishingCop wrote:one of the mods should move this up to Watering Hole - it would get more views and doesn't really belong in the funny joke section IMO.... great story

You wish is my command !

That's an incredible story... thanks for sharing this

FishingCop wrote:one of the mods should move this up to Watering Hole - it would get more views and doesn't really belong in the funny joke section IMO.... great story

It was no disrespect, it was a story sent to me that I felt to share and IMO i posted it in the "Short Stories and Humor" section

so its all good

2TIM 4:7 I Have Fought the Good Fight, I Have Finished the Race, I Have Kept the Faith.

Marine by day, Lover by night, and a drunkard by choice... Semper Fi
Top