I dont currently have this boat, but this is a project I did back in 2009. wish I would have kept it

Unlike the super set-ups on other custom jons, I tried to keep this relatively simple. The boat is a 2008 Lowe 1436L, the trailer is a 2009 continental, the motor is a 2007 Mercury 9.9 four stroke, and the trolling motor is a 40 lb thrust Minn Kota. Everything was bought 5 weeks before the finished pics were posted. Boat and trailer bought new, motor slightly used.

front floor, under deck storage. you can see where the deck legs were welded

on the port (left) side, is what I call my accessory rail. I really wanted to have the rod holder and the rods would not fit right unless the holder was mounted at a certain height, so I added the 2x4 . switch box has a fuse board in it. controls power to the fish finder, bilge pump and front and rear lights

) up until this mount I had a hard time making a sturdy mount so I just went all out. 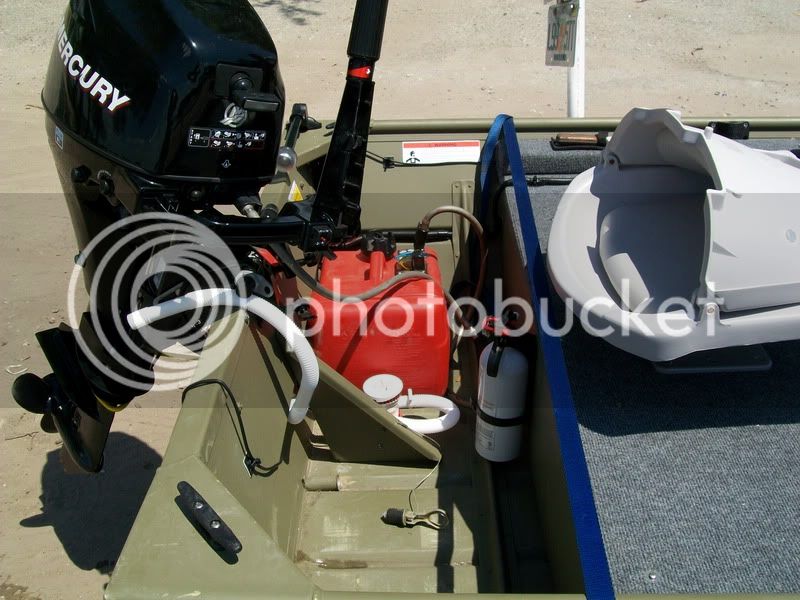 all 4 rod holders in

Nice setup! I have an older Lowe 1640 that I plan to do almost the same setup. I take my grandsons fishing so I like having the lower floor areas to keep them in the boat. Did you put anything under your floors like foam?
I never learned a single thing while I was talking.

nope, no foam under the floor. would that be for noise reduction?
Top

Nice work. I like your trolling motor bracket.
“There’s a fine line between fishing and just standing on the shore like an idiot.” ~Stephen Wright

Any more pictures of what you did? I have the same boat that I'm going to start working on once it warms up around here. Nice to see another 1436L!
My 1436 and Trailer Project
-Ryan
Top

rmzachar wrote:Any more pictures of what you did? I have the same boat that I'm going to start working on once it warms up around here. Nice to see another 1436L!

sorry, I just checked and didnt see any pics that show whats not already shown above. anything specific you need to know?
Top

i have a question. is the trolling motor made to be a bow mount because i have a transom mount and i dont like how it handles when trolling. i was thinking of a way i could make a bracket to mount it on.the only problem is that the steering handle would face forward and it would look ghetto. oh ya its a 35 p.o.t with a long shaft. any help very appreciated.
Top

the trolling motor pictured above is a transom mount. I just spun the head around. on minn kota endura TMs it should be as easy as removing 1 screw under the head unit. there may have been a slight pain getting the wires to stay out of the way when putting the screw back in. the screw goes through the shaft and so do the wires for the head of the unit.
Top

That's a really nice build. Everyone should keep in mind though that the navigation lights need to be visible above any other objects on the boat. Easily fixed with one of those elevated bow lights.
Top

thank you back4more im defiantly going to do that with my motor.

bobberboy wrote:That's a really nice build. Everyone should keep in mind though that the navigation lights need to be visible above any other objects on the boat. Easily fixed with one of those elevated bow lights.

youre right. when I installed the lights I hadnt decided to install the trolling motor at the bow. Ive got a 1232 now and Im thinking about installing the the same bow & stern lights pictured above. the light at the stern is a flip up 12" light. they are really affordable.
Last edited by back4more on 27 Feb 2011, 21:01, edited 1 time in total.
Top

Nice job, was your fish finder working in that spot well enough? I assume you turned it around when ya sat up front?
2TIM 4:7 I Have Fought the Good Fight, I Have Finished the Race, I Have Kept the Faith.

Great build, sucks you don't have it anymore

Love your "rail" idea and TM bracket. Going to put those ideas into my 12' V Aluminum in another month or so...can't wait to get it going
Top

How stable was that casting deck?
My 1436 and Trailer Project
-Ryan
Top
16 posts