The guy who sold it claimed it ran good, but it didn't. Engine issues, worn impeller, beat up bottom -- it could barely get on plane IF you could get it to run long enough. I finally fixed the engine issues and put in new impeller and it'd get up on a plane, but only around 23 mph tops with the new impeller/wear ring and a LIGHT load.

The interior was decent, but carpet was getting ragged and you could tell the wood floor was getting creaky. I was never too fond of the interior -- this is a big boat that has very little usable space, and with a cooler and a couple people, can't even get on plane. I suspected water-logged foam. The console was loose, the wood floor probably rotted/beat up where the screws hold it down.

Also the jet intake is the lowest part of the boat -- just glancing off of a rock shatters the cast aluminum intake grate and Mercury is no longer selling replacements. I bought physically the last one Mercury had.

All the "options" were shot -- the trolling motor, both depth finders, the automatic anchors -- all old and broken. 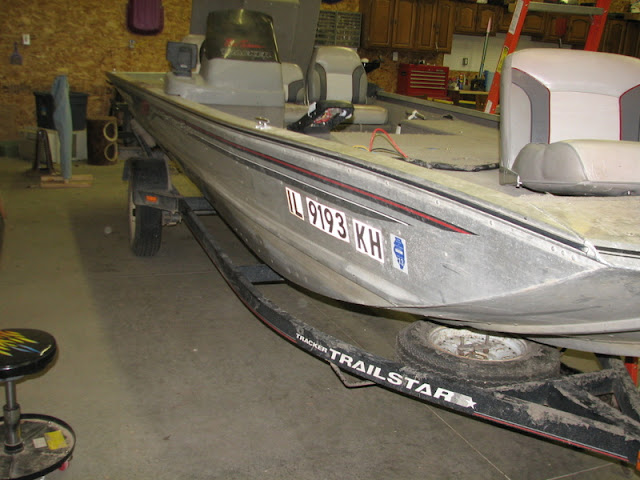 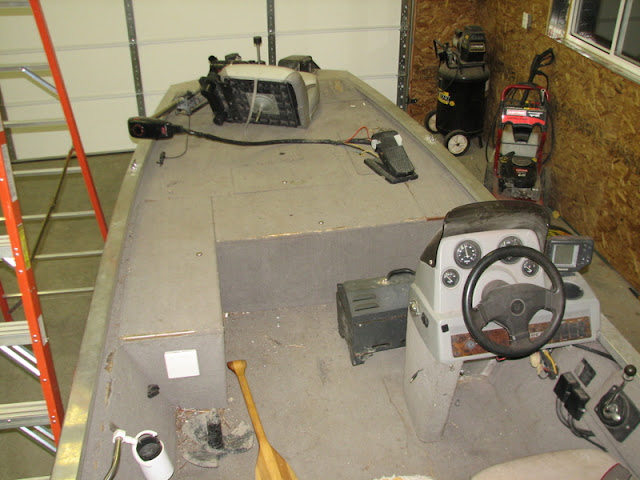 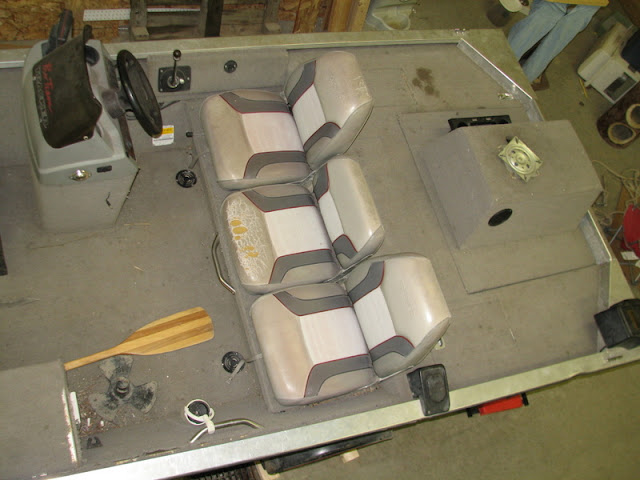 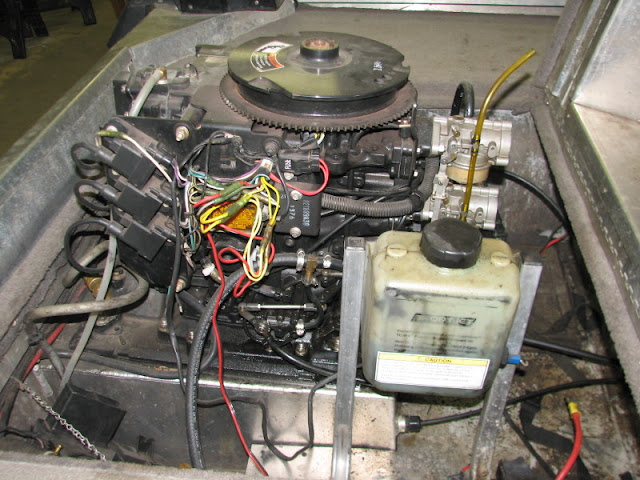 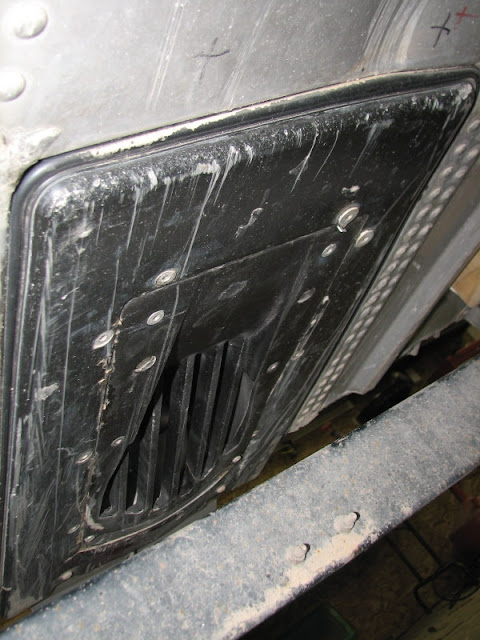 Here's a shot of a big dent right in front of the inlet grate from the previous that I think is hurting the speed: 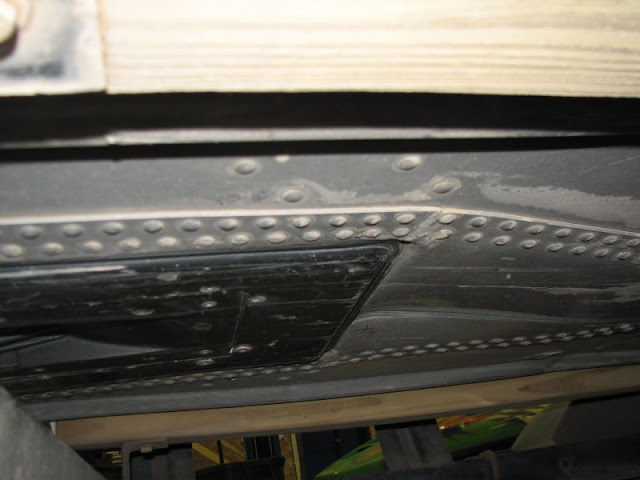 Then, last summer I got hung up on a sharp rock or metal fence post and produced this gash: 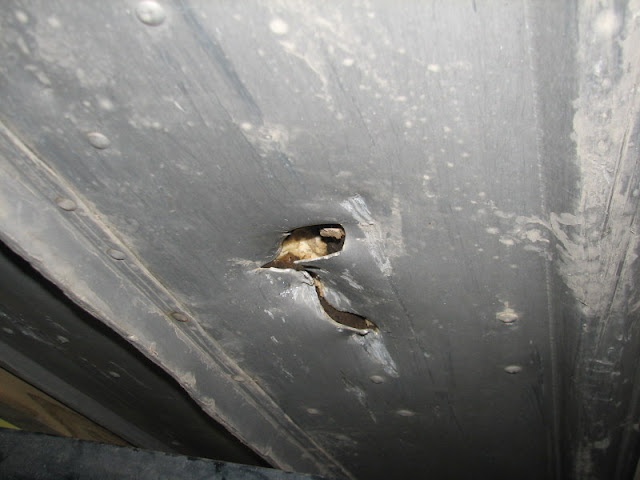 The bottom is pretty beat up in general as you can see from the long view of the above gash: 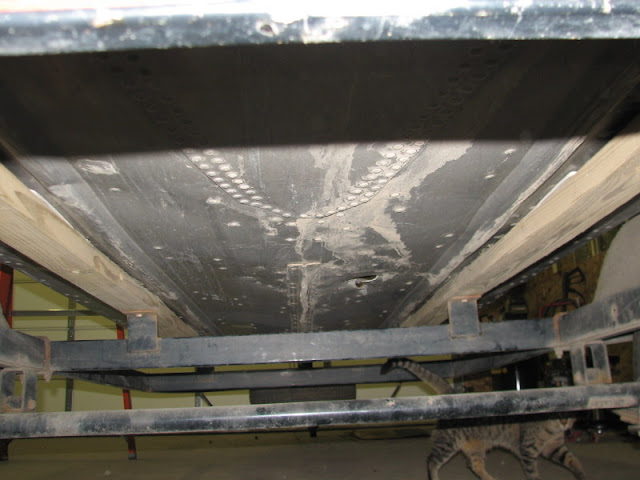 I couldn't decide what to do: Part it out and salvage the hull, try to sell it as a fixer upper to some sucker, or ... try to fix it into something that works for me.

I removed the gas tank and got it down to where I could access "the gash" and confirmed all the foam under the floor was water-logged. It had been out of the water since last summer, and if you squeezed the foam, water came out.

So I decided on trying to fix it -- I'm not sure this is a great plan, but it gives me a nice project to work on in my shop. I've rebuilt a smaller 12' jon boat before and enjoyed that project (still use that one while this one is down).

My plan is:
- Gut the interior, saving as much as possible to re-install with new carpet. This step is so I can flip the boat over to focus on the bottom. No foam or interior in the way of fixing the bottom, so I can weld, etc.
- Repair and strengthen and smooth the bottom as much as possible. Get rid of the 1.5" rails(?) that catch rocks. If this fails, sell the hull for scrap and part out the engine. I'm almost guessing that (with the thin bottom on this) this will be my stopping point.
- *If* I get the bottom fixed, add a layer of UHMW plastic to the bottom.
- Maybe add a small tunnel to lift the engine to prevent intake damage on rocks.
- Reinstall jet & engine and check performance -- if the repaired bottom and lighter weight interior go fast enough and gets on plane, then proceed to next step:
- Reinstall a minimal interior with more floor and interior room instead of all the compartments the old interior had. I'm thinking instead of the engine down in a hatch, have a doghouse around the engine. Move the controls a little more forward.

If anyone has faced a similar problem with a beat up bottom and had good or bad success, I'd like to hear your thoughts.
Last edited by Novicaine on 08 Apr 2012, 11:40, edited 2 times in total.
Top

looks like an awesome project! i am facing issues right now with my transom being completely destroyed! I have been debating about scrapping the hull and finding a decenct used one that i could just modify. then i got to thinking that since i got the boat for free..i could justify the soon to be steep welding bill. i love 98% of the boat and can't wait to get it fixed so i can start moding and fishing!! I say go for it and improve the original design of the boat! good luck!
Jon Build Thread
https://www.tinboats.net/forum/viewtopi ... 21&t=24939
Top

This weekend I started gutting it out:

Here is first step, removing the gas tank and inspecting the big gash, where I found waterlogged foam: 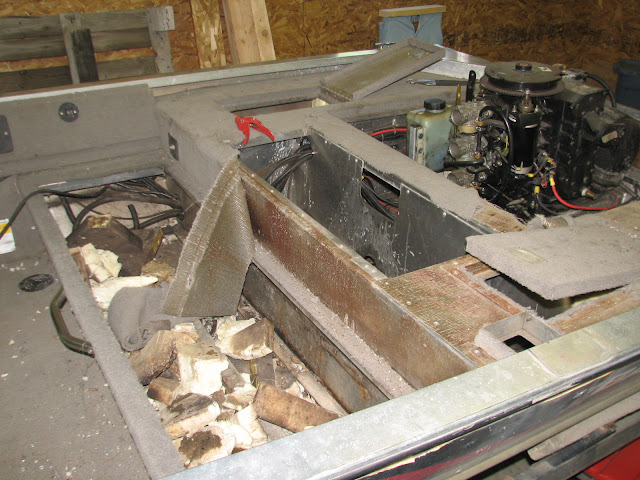 Looks like this "firewall" between the front and back may be structural; I'll have to replace it: 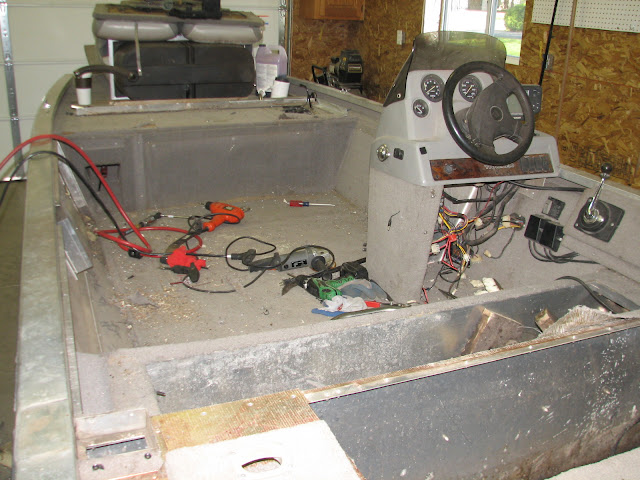 Gettin ready to remove the engine: 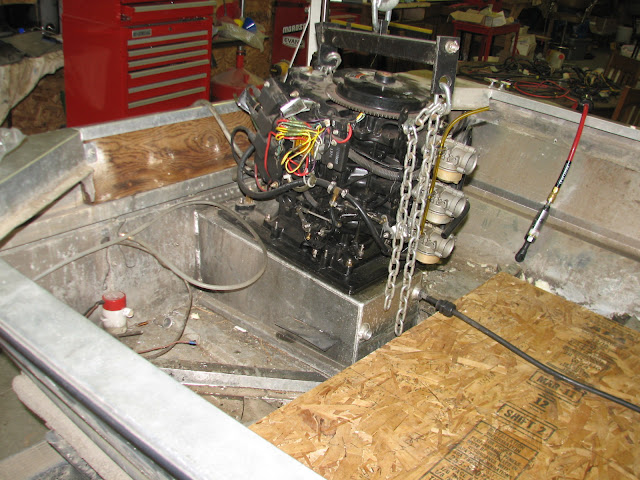 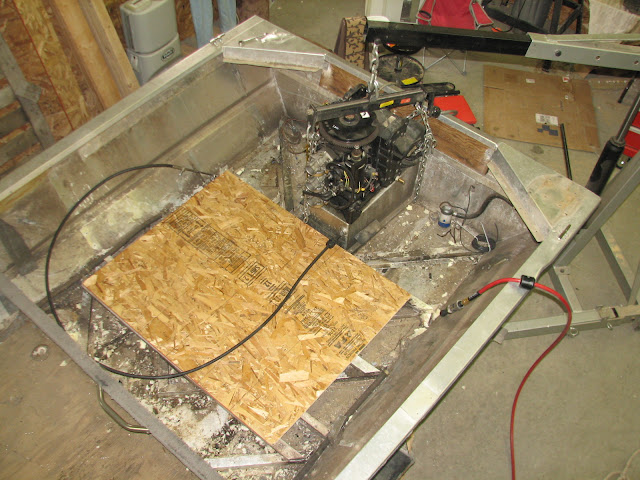 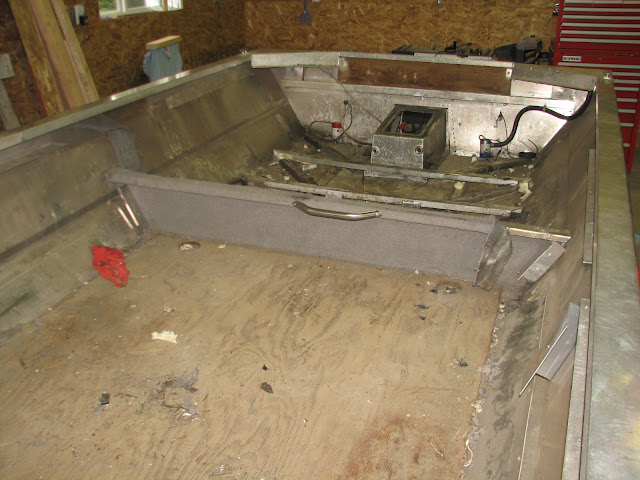 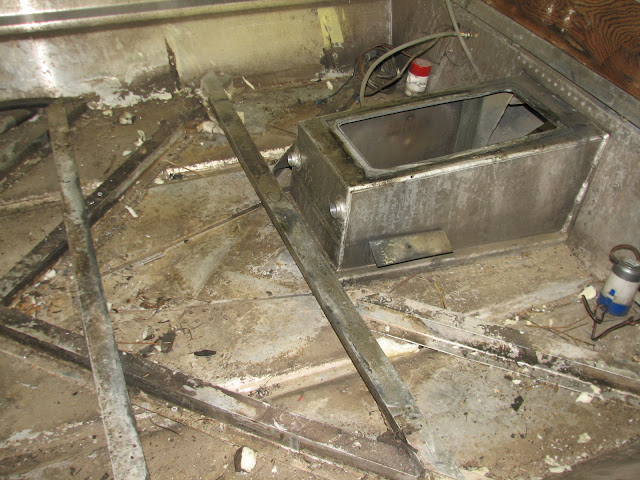 Shot of the empty rear end: 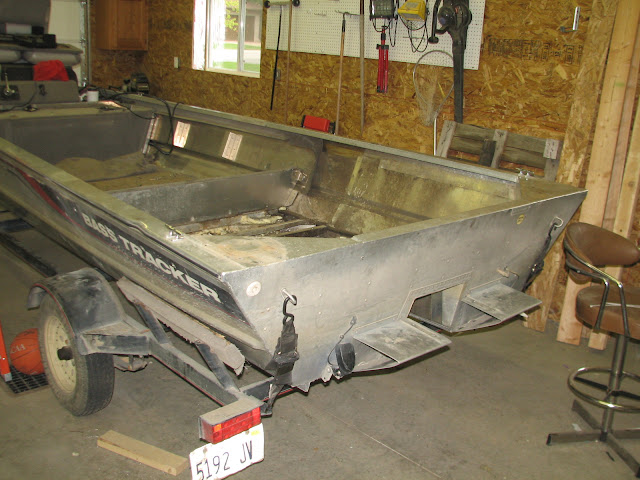 Shot from back facing front, I still need to gut the front deck: 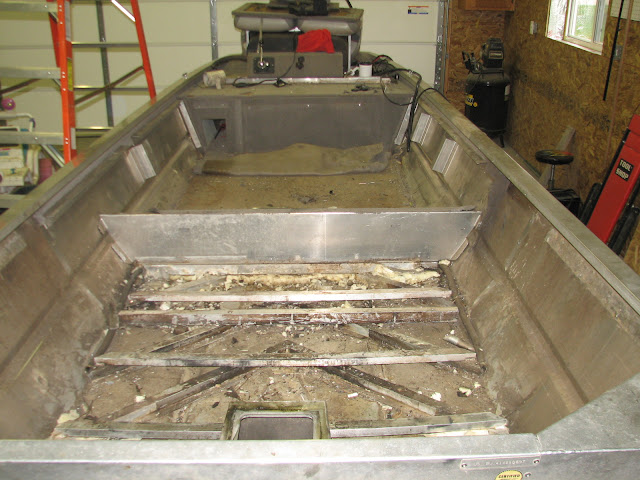 +1 will be watching this one
Work: A dangerous disorder affecting high public functionaries who want to go fishing

where are the beers??

I finally got all the interior and the bulk of the waterlogged foam out.
I pulled out at least 6, 32-gallon trash bags full, each one weighed at least 30 lbs (I guess)!! No wonder this boat has been such a pig lately!

A little more clean up and then I can flip it and start working on the bottom. 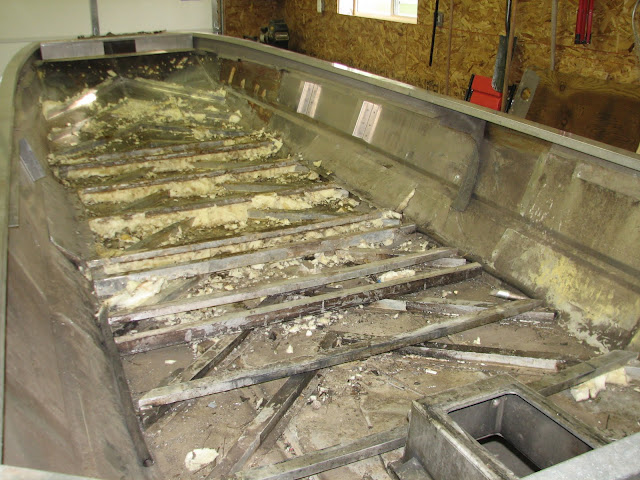 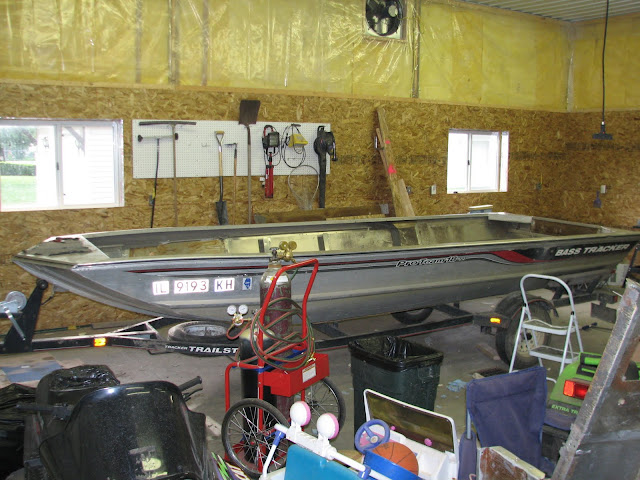 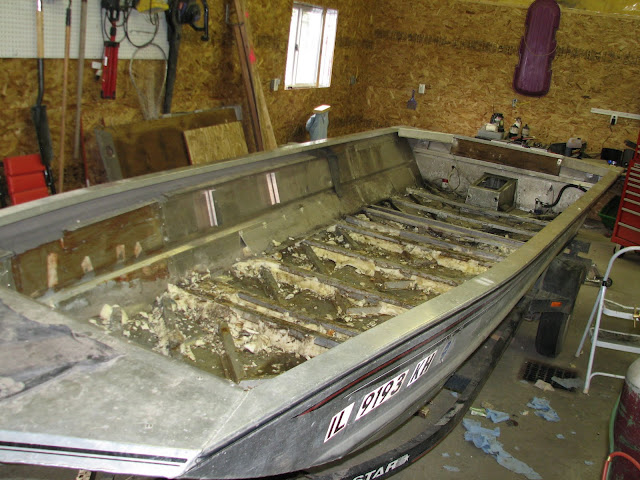 Dang, That's an early tracker to take apart eh. I myself have a 87 Tracker MV-16, had to completely tear everything out and put it back in. Rotten floor, Waterlogged foam, alot of the problems, The wiring was [Censored], sorry my french anyone, the guy freaking used a snowmobile windshield on the boat... And mostly the reason why there were so many problems, the guy tried to be a do it yourselfer but he kind of failed and the reason being, that he was a state cop, didn't know what he was doing when it came to wood, and especially wiring... Also forgot to mention a rotten transom. Tracker sure didn't take into consideration about after life for these boats.

Keep it updated, I'm wanting to see this build.
Top

This weekend I started modifying the jet tunnel to raise the intake about 2" above the bottom of the boat.

Here is where I enlarged the hole in the hull to fit the new structure: 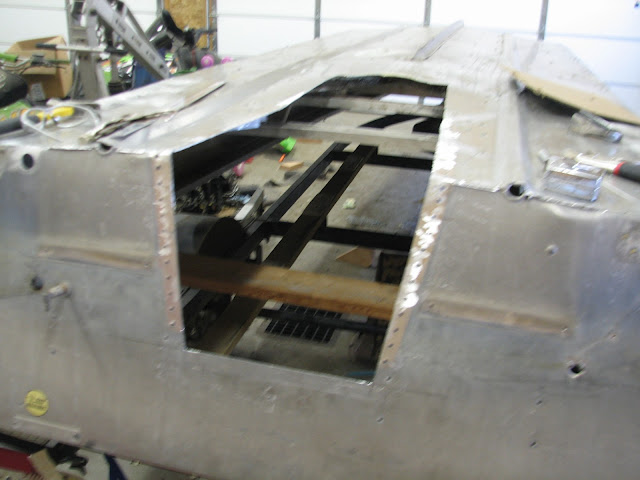 Here I welded two 2" aluminum angles to the bottom of the motor house to frame up the 2" lift: 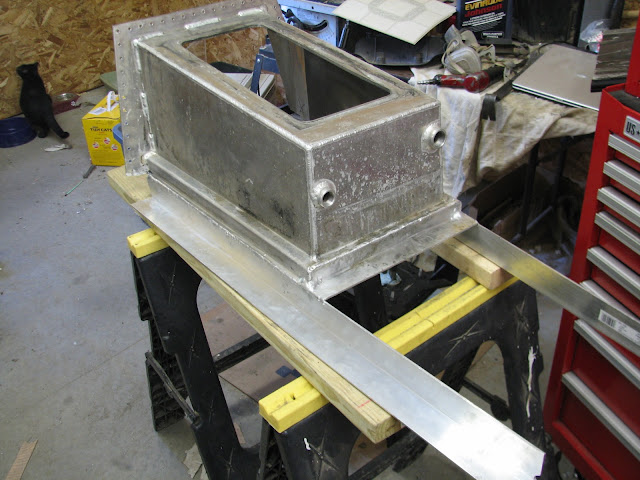 View of the same from the bottom: 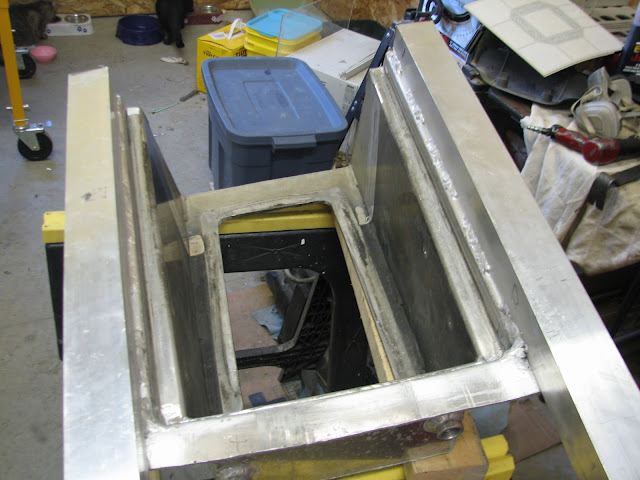 Fitting the tunnel assembly to the hull: 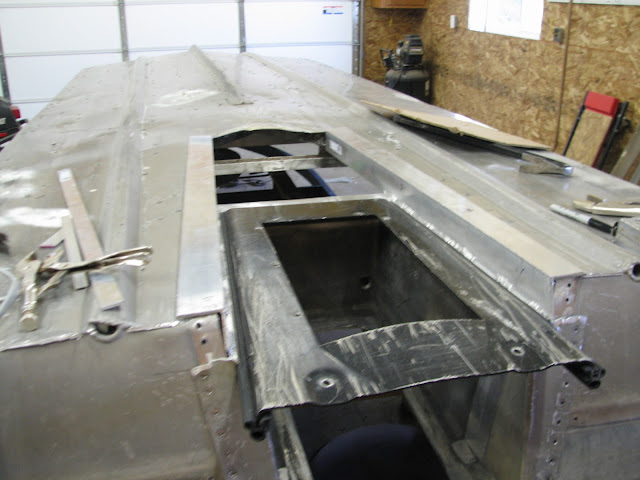 First look at the raised intake, can almost visualize the final result: 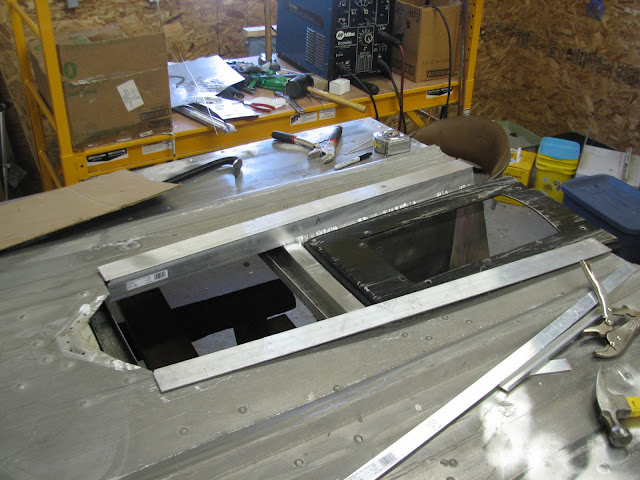 Now I need to find a piece of 1/8" aluminum for the top of the tunnel, then cut it and weld it in and then re-rivet (or maybe weld) the whole assembly in the boat.
Top

Now that is a sweet mod great job
If you need to find me I'm fishing.....just don't tell my wife.

“In the End, we will remember not the words of our enemies, but the silence of our friends.”
Top

Looking good dude. You're off to a great start. Gonna be watching your build.
Dave In Georgia
My Bass Tracker Tournament V-17 Restoration/Mod: https://www.tinboats.net/forum/viewtopi ... 21&t=15343
Top

I welded on the top of the tunnel today -- a marathon 3 hrs of tig welding! I need to do a little trimming and fitting and fix a few welds, and I'll be ready to finally install the tunnel assembly to the hull!!

In the following pictures, I show the tunnel assembly outside of the boat, but when I do the final install, it will actually go inside the boat, and the boat skin will be welded to it. Why? It just fits better that way -- its easier to straighten the hull to match the tunnel that way with a floor jack. And I have it set up so all the water-tight welds on the outside will be overlapping joints, which I can handle, so it should be pretty sturdy. I may do a few solid rivets just to hold it in place while welding.

Here's how it's coming along: 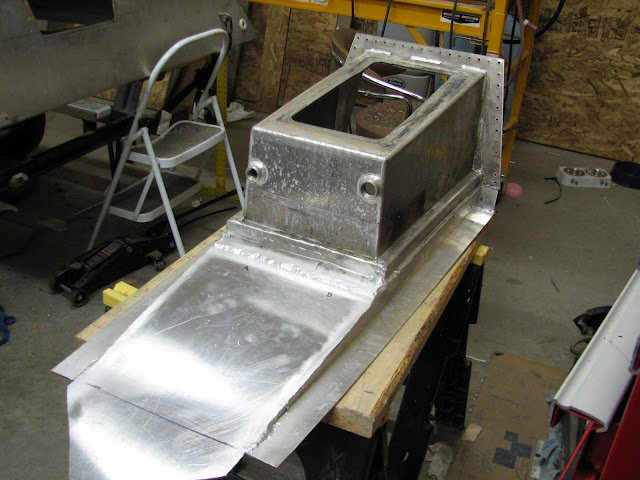 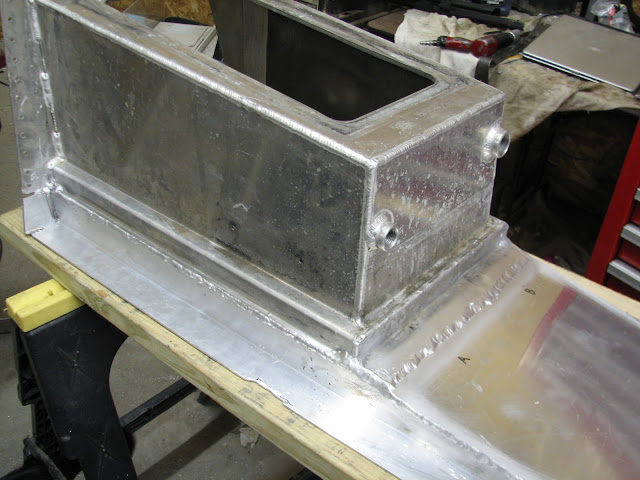 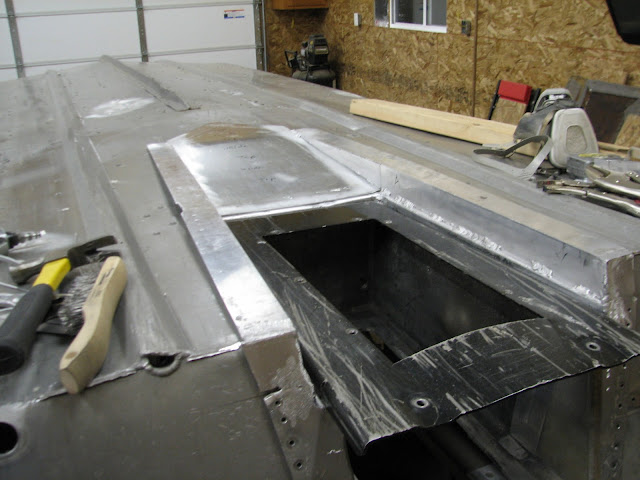 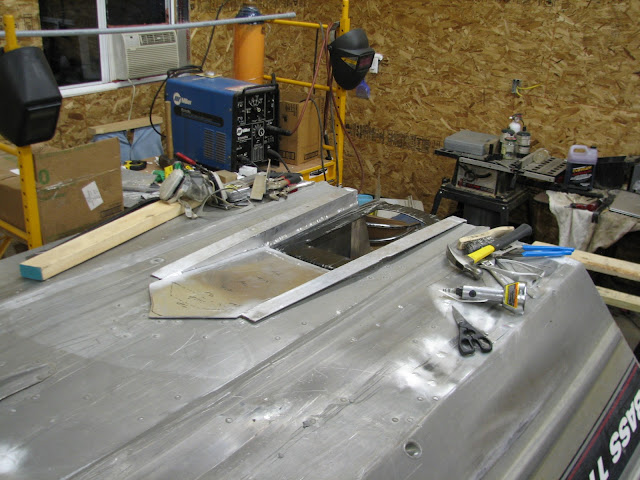 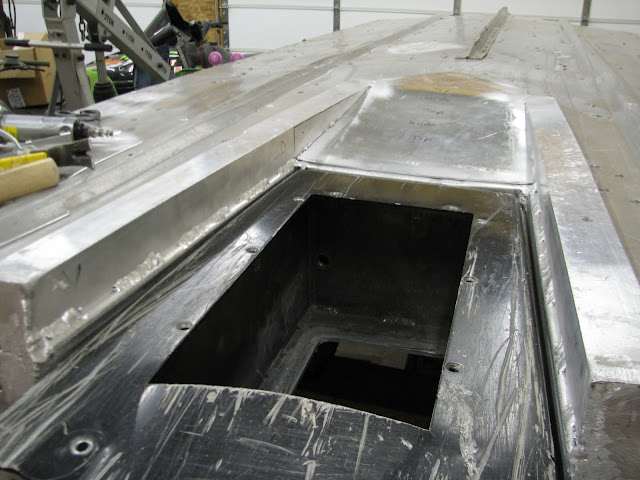